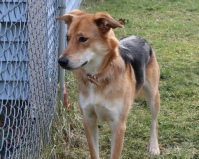 January 2016.  Next we decided to foster a tall, 52 pound dog with a severe case of separation anxiety.  Camden (aka Kaiser) was a very pretty, affectionate dog who had been returned multiple times to the shelter and was known for breaking out of crates and causing damage in previous homes.

The meet and greet with Boomer went fine and they got along well together.  But Camden often wanted to play more so he had to be monitored to make sure Boomer wasn’t being harassed to play.

Because of his past history Camden had to be in the same room as me for the first several days.  He very quickly displayed the curiosity and ability to get into all kinds of trouble.  He was tall and by standing on his legs could reach items very high in the room on any counter or table.  He got hold of a couple of small plastic items and quickly crushed them.  No chance of getting them from him in time.  If you offered him treats he would eventually exchange the item, but not before the damage was done.

We kept lots of toys in the house, which Camden enjoyed playing with.  He especially enjoying chewing through the nylon of the eight or so Wubba toys we had scattering around the rooms he was allowed in.  Fortunately he didn’t do enough damage to actually destroy any of them.

When he got hold of a toy he would on occasion shake it with tremendous force, and would sometimes fling them across the room.  He tried to jump up on the aquarium when he first saw the fish.  So maximum observation protocol was in effect to teach him what he could and couldn’t do in the house.  We also quickly established that he wasn’t allowed to run around and bounce off the couches.  Camden very quickly made himself at home and immediately showed his affectionate side that so many people had found endearing about him.

The main goal of the first few days was to get him to voluntarily go into and stay in his plastic crate.  I kept putting a few treats inside to coax him in.  By day two he finally went in all the way and turned around so I could sit in front of the door and give him treats while he stayed inside with the door opened.  The hope was to get him to accept the opening as a psychological barrier and to avoid him ever having an episode where he would try to break out of the crate.

By day three of his fostering we started watching two other dogs for a family member that we had previously committed to.  After a normal meet and greet and a few minutes of play Camden turned a bit bitey toward the dog that had a very dominant way of playing, and then later against the more shy one.

So for the next four hours Camden was kept on leash while they interacted.  It was no problem keeping everyone inline, but since I hadn’t gotten Camden to the point of being locked in his crate yet, I decided to return him for the next five days while we watched the other dogs.  Better safe than sorry.

After getting him back we continued crate training using “high value objects” like knee bones (with meat and marrow) and antlers that he only got while in the crate.  We gradually extended the time he was in the closed crate and he seemed to do well enough inside.  The occasional scratch at the door or whimpering could be ended with some reassuring words

He was affectionate, did well on walks and seemed 100% housetrained.  But if he was not constantly watched he would at some point calmly wander into another room and quickly find something to gnaw on.  Lots of Lysol got sprayed on items, but each day something would get damaged or destroyed.

Things we discovered Camden could do:  Open warming tray on oven.  Pull forward and knock over toaster on counter.  Pop off the lid of the kitchen trash bin.  Bulldoze over three foot tall garden fence if not being watched.  Reach and try to eat or gnaw on anything less than six feet off the ground: plastic, rubber, wood, cloth, paper and metal objects.  The big ticket item by day six was one of the two pairs of glasses that I’ve owned in my life.  He quickly popped out both lenses and made 7 or 8 divots in one of the lenses.  By the time he finally agreed to exchange them for a treat, the damage was done.

He did this within one minute of being in the room with me, to glasses that had been in the same place for six days.  This type of behavior proved to be a very daunting problem to deal with.

So everything of any value had to be kept on a shelf six foot high or in a closed room. We installed a gate in the laundry room since he kept finding too many things in the recycle bins or stacked boxes to get into, despite frequent dosing with Lysol.

He did well in the yard, other than jumping/crushing our 3 foot garden fence when not being watched a couple of times.  Boomer and Camden had great fun running around the deck with Boomer usually chasing Camden and doing his jump down from the bench cut-off maneuver.

Camden always checked to see if the fence gate was secured properly.  He would also lay down staring at the baseboard of the various doors in our house in a way I’d never seen before.  As the days went by it because very noticeable that Camden would make note of something in a room, but wait until he wasn’t being observed before getting into it.

Camden didn’t overeat or have food guarding issues so I was able to leave two food bowls out on either side of their water bowl and have both dogs eat together.  I used pill pockets to give him the medicine he was on for his separation anxiety. While he was normally very relaxed in the house, I would sometimes notice that Camden would start panting for no apparent reason.  Not sure if that was related to the drugs or not.

Walks went fairly well.  He was very interested in the multitude of squirrels running around in our neighborhood but it was fairly easy to distract him from becoming fixated on them.  Other than the destructive habits he had learned, he was a wonderful dog to have around.

By day 12 of our fostering we weren’t yet comfortable leaving him alone in the house.  I planned to set up a camera and record out initial short attempts to leave him alone, but with our wedding anniversary activities coming up we decided to bring him back to the shelter for a few days so we could avoid any chance of him having an episode and trying to break out of his crate, which to that point he was fairly content to be in.

After more than a week break we got Camden back for the next four weeks.  Crate training went fairly well, with usually two sessions a day.  I set up a video camera and recorded him each time we left the house for increasing amounts of time.  He settled down calmly and showed no real issue being in his crate until we got home, when he would get very excited.

Since he kept damaging the garden fence if I wasn’t outside watching him (and Camden often wanted to spend a long time outside) I finally relented and opened a section for him to get into the garden area.  He did some damage here and there but since it was winter it wasn’t a huge issue.  He also would climb up into our four foot high compost pile and pull out some of the items, leaving the occasional banana peel or grapefruit rind in the yard.

We took daily mile long walks in the morning, and a long tracking walk in the front and side yards in the evening.  Camden went out several times a day and always had a large variety of toys to play with.  But we kept the best antlers and cow bones for when he was in his crate.

We started calling Camden “Putty” while we had him.  If you pet him while he was standing or learning on you he would get so relaxed that he would go limp like putty and collapse on the floor.

At times Camden would get a bit bitey with Boomer while outside.  It worked great having Boomer chase Camden around the backyard, but if Camden was chasing his tail and fur would rise up and he would tackle and act bitey to Boomer.  If Boomer had a toy in his mouth in these play sessions Camden would grab the item from Boomer.  So their outside play had to be orchestrated and Camden immediately distracted anytime his tail went up. Outside of these overly excited moments they got along well together.

We watched our former foster Shadow for awhile while we had Camden.  Camden wanted to get a little too friendly with her so he needed to be monitored to keep from stressing her.

The big issue with Camden was that every few days he would get into something new.  It was the same pattern of him calmly going into another room and within a minute getting something down from a shelf or table less than six feet high and quickly chewing it up.  We maintained a pretty radical protocol to keep anything of value out of his reach, but any forgotten items left out would be quickly found.

After having him back for almost four consecutive weeks I was unable to find a solution to this very daunting destructive habit of his.  But the good news was that in the 38 total days with us his reported separation anxiety didn’t seem to have been a problem and he was made available for adoption.  After several weeks at the shelter he was adopted.  All the best to you Camden!